On my continuing quest to read the all of Steinbeck’s work, I am now another book closer.

It is a book that I had not even heard of before I began my mission – ‘The Short Reign of Pippin IV‘. The book, published in 1957, is set in what seems to be post war Paris. The political system is in disarray with none of the political parties having enough support to become the government. So a ridiculous scheme of reinstating the monarchy is floated, not so much so to create a system of government but rather to set up a patsy – a pawn – for the various parties to exploit. A long-lost royal lineage is found and the game begins.

This is not one of Steinbeck’s better books but he is such a skilled writer and story-teller that one quite happily keeps bouncing along through the pages. Arguably, this is a satire but the humour is uneven and the story line not quite as absurd as it could be.

At its heart, the book is a statement that governance in itself is an end where the means are the politicians, vested interests and business; anything but the interests of the people.

As the autumnal days grew shorter, more and more private audiences were asked or even demanded of the king. The he would sit behind his audience desk in a room that had been built and embellished for another king, while two or three representatives of faction or interest spoke to him privately. Each deputation confident that the king was their partisan. They never came alone. The though drifted through Pippin’s mind that they did not trust one another. Every on of the representatives had the good of France at heart, but it was also true that the ultimate good of France rested in the primary good of faction – or even individual. (emphasis added) 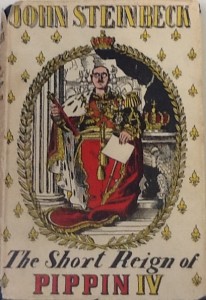 That is really what politics has come to be more often that not, though perhaps I am more cynical than Steinbeck. I don’t always think that ‘the good of France’ is what drives politics but rather it is the more base motivations.

The question of leadership is explored again by Steinbeck. As I wrote in my post on ‘The Moon is Down‘, that book played out a clash between a authoritarian and democratic leadership. ‘The Short Reign of Pippin IV’ plays out a situation where the leader is anointed by the political system, which is looking for a patsy for the ends of the various parties, but he decides that he will be a leader of the people and not a pawn in the system. And then the parties finally can agree on one thing – a leader with a singular vision in the interests of the people is just too dangerous.

That is the issue I have with political systems based on political parties. A member must toe the line of the party, that is vital for the party if it is to survive and have an identity, a platform. That takes away the agency of the member and gives it to the party. And there is a thin line between democracy and tyranny of the majority.