my thoughts on john steinbeck’s ‘the moon is down’ 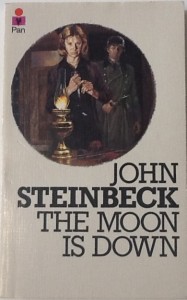 As per my mission to read the complete works of Steinbeck, I just finished another Steinbeck. ‘The Moon is Down‘. I have had this copy for quite a few years but have never got around to reading it. I bought it from Academic & General Books on Lygon St for the princely sum of $1.

The book, published in 1942, is about how a small town in Northern Europe deals with the occupation by the Nazis. Steinbeck writes about how people deal with having the freedom (more accurately their agency) taken from them.

Interestingly, Steinbeck also deals with the leader of the invaders, Colonel Lanser, with a lot more sympathy. He is a man following orders while understanding the futility of attempting to make the people to comply while taking away their agency. Yet he persists knowing the futility of his actions and the path they will lead to.

The Mayor is the other character that I really liked. As an allegory of ‘the people’ in a free society, there is a great exchange between the Mayor and the Colonel when they meet for the first time after the invasion. The Colonel is telling the Mayor that the townspeople must continue to work the coal mines, which is why the invaders are there – the coal.

‘They must. They are an orderly people. they won’t want trouble.’ He waited for the Mayor’s reply and none came. ‘Is that so, sir?’ the colonel asked.

Mayor Orden twisted his chain. ‘I don’t know, sir. They are orderly under their own government. I don’t know how they would be under yours. It is untouched ground, you see. We have built our government over four hundred years.’

The colonel said quickly, ‘We know that, and so we are going to keep your government. You will still be the Mayor, you will give orders you will penalise and reward. In that way, they will not give trouble.’

Mayor Orden said, ‘I don’t know, either’ He turned to the colonel. ‘Sir, I am of this people, and yet I don’t know what they will do. Perhaps you know. Or maybe it would be different from anything you know or we know. Some people accept appointed leaders and obey them. But my people have elected me. They made me and they can unmake me. Perhaps they will if they think I have gone over to you. I just don’t know.’

The colonel said, ‘You will be doing them a service if you keep them in order.’

‘Yes, a service. It is your duty to protect them from harm. They will be in danger if they are rebellious. We must get the coal, you see. Our leaders to not tell us how; they order us to get it. But you have your people to protect, You must make them do the work and thus keep them safe.’

Mayor Orden asked, ‘But suppose they don’t want to be safe?’

‘Then you must think for them.’

Orden said, a little proudly. ‘My people don’t like to have others think for them. Maybe they are different from your people. I am confused, but I am sure of.’

And thus the collision  is set up between a authoritarian system (where leaders are unquestionably complied and obeyed even by those who know the inevitability of the their approach) and a democratic system where, to put it as simply as Steinbeck, leaders are made and unmade by the people. Its the conflict between leadership that focuses on order versus the agency of the people.

Free man cannot start a war, but once it has started, they can fight on in defeat. Herd men, followers of a leader, cannot do that, and so it is always the herd men who win battle and the free men who win wars.

Even though the book was published in 1942 and is about war, it is also a powerful statement on the contemporary nature of governance and leadership. At the end of the book, the Mayor evokes Socrates Apology – which in itself is a powerful statement of the dignified agency and that unrighteousness runs faster than death.