making a standing desk at work

I am generally a fidgety person with a fairly short attention span. One of the things I really struggle with is sitting at my desk for hours on end writing lectures, marking, emailing and other computer based activities. I find myself wanting to move around or even go for a walk after 15-20 minites. This usually means that I lose the rhythm and flow of the task at hand. This was particularly an issue when writing. For me, when I am writing – it only really ‘takes off’ when I am found my rhythm. And the need to fidget means the rhythm is broken leaving me more than not just giving up on the writing.

Then I read Gina Trapani’s post ‘Why and How I switched to a Standing Desk‘.  Her two motivations were ‘Higher calorie burn and better posture’, not concerns that are limited to her alone I add. But what struck me was that from the view point of a fidgeter it seemed to be a setup that would allow the fidget to happen without disrupting my rhythm. A valve almost for that pulse of energy (or boredom) to escape from.

I was at that time also moving house and took that opportunity to do a bit more research on standing desks. There were a lot of types of desks from the seemingly counter-productive ‘treadputer‘ to the basic DIY ones using coke cans, office storage boxes and the such. I ended up getting a pretty good one mainly because I was really busy and in a rush and this was available and delivered.

And it has been just a great experience. I find myself being far more productive when I can stand while doing my work. It was hard to get used to in the beginning. I had sore feet and back but as I got used to it, I found myself getting annoyed when at work as I had a conventional desk there. There was no simple and cheap option that was obvious. 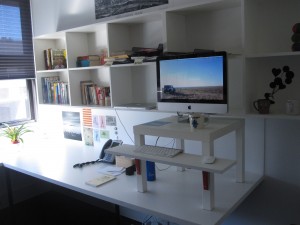 Ikeahack standing table that uses existing office furniture and does not do any permanent damage.

That was until I saw this. An simple Ikeahack to create a very cheap and, importantly, removable and non-permanent standing desk at work. A few colleagues are using standing desks; mostly made from storage boxes. The best one, however, has meant that the office furniture has been ‘modified’ permanently – an occurrence which will definitely annoy the institution. It was also one that required saws, set-squares, jigs, lathes, overalls, and other whatmacallits. More work than my toolbox can understand. The best thing about this Ikeahack is that it costs under $30 (and could have been cheaper but I wanted a longer keyboard shelf). It required no more tools that a drill (a screwdriver would have done the job) and a spirit level (free app on the iPhone). The whole job took about 30 minites.

Its my first day using the setup and so far its been just terrific. It does leave me being able to sit and work; all it requires moving desktop, keyboard and mouse onto the table. However, I will keep an eye out for a cheap bar stool type seat which would make it all just work.

This entry was posted in Life Hack, Writing and tagged productivity. Bookmark the permalink.