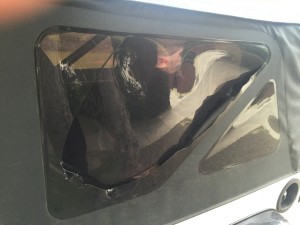 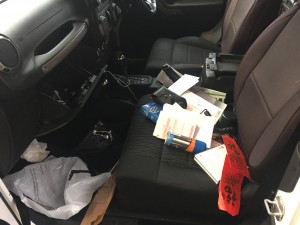 A few weeks ago, I had parked my car on my street overnight and in the morning discovered that someone had taken a knife to the window of the soft-top and broken into my jeep.

Understandably, I am not happy about this. I have parked on the street in front of my apartment so many times, and nothing had happened. It was very frustrating that this had happened right under the balconies and windows of other apartments in my building.

As I surveyed the mess that the thief had had, I started to look for what was not taken – the service books, manuals, CDs, the fire extinguisher, the first aid kit, and such. I had a good look to see if there was any damage to the inside of the jeep – ripped seats, broken plastic bits, etc. And I also checked to see if the thief had urinated or worse inside. They had climbed in and helped themselves to approximately $30-40 in coins, iPhone headphones, and Greek worry beads that a friend had just given to me. Other than that, it was ok.

I tidied the inside and carried on with my day.

As I drove around running my errands, I felt a sense of gratitude for my thief. He could have made the whole experience much worse. He could have taken my jeep manual and service books – that would be a really hassle. He could have been very malevolent using the knife, used to cut the window, to cut up my seats. And the most horrifying would be to deal with the aftermath of him relieving himself in a variety of ways – that is not something I like to contemplate.

Later in the day, the gratitude was joined by a sense of sadness for the thief. No one wants to end up in a situation where breaking into cars is a something that one does. This is not the preferred option. This was not the dream or desire of a young person growing up. This was the result of bad decisions, bad luck, and a lack of options.

Somewhere inside the thief was the story of child who was lost a long time ago.

One Response to Today’s thief, yesterday’s child – an empathic mindset