my thoughts on steinbecks’ the red pony

And the mission keeps ticking on. Another Steinbeck book is done – The Red Pony.

I have always felt that Steinbeck was generally a writer of hope. Unlike the Orwell, Carver, Kakfa and Camus – my other favourite writers – Steinbeck never left the reader feeling hopeless and despair. The end of Steinbeck’s stories seemed to always offer hope – however slim. The books I have enjoyed ended with a powerful show of love.

The end of The Grapes of Wrath is a great example of that. The story itself is sentimental and plays with the reader. As the Joads travel through the story, they experience the vagaries of a cruel writer whom at every crest was already plotting the crash into the trough. But right at the end of the book, in the last paragraph, in the last few sentences, Rose nurses the life from  stillborn death. And life is reclaimed and continues once again. 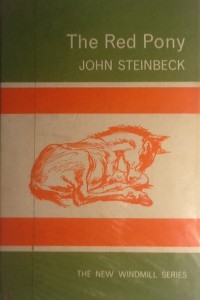 The Red Pony, however, is not one of those books. Its more akin to The Pearl but more hopeless. In The Pearl, Steinbeck gives Kino a chance to exert some control over his fate when he takes on the trackers. Even though, Kino loses the battle against fate, he does leave it torn and bloodied. In The Red Pony Steinbeck does not even allow for that.

The book is actually a collection of four stories which had been published in various magazines and brought together into a single book in 1937. The first story – The Gift – is about a young man’s transition into manhood. Ten year old Jody Tiflin is given a young horse by his father. He has to look after this colt and does so fairly diligently under the guidance of Billy Buck – what Billy does not know about horses is just not worth doing. Carl – Jody’s father – is a counterpoint to Billy. He is a strict disciplinarian who does not like ‘trick ponies’ and wants to raise Jody right. Jody and Billy have an open relationship and talk to each other comfortably. And it is Billy that Jody relies on when dealing with his horse.

The horse means that Jody has taken the next step. Jody’s friends come to see the horse and they see Jody not as a boy but as something different.

They knew instinctively that a man on a horse is spiritually as well as physically bigger than a man on foot. They knew that Jody had been miraculously lifted out of equality with them, and had been placed over them. p.12

And Billy is Jody’s guide when dealing with the horse. In Jody’s eyes, ‘Billy Buck kept his word’.

Then one morning Jody wakes and the horse is not in the barn. He follows the horse’s tracks.

As he followed the plain trail, a shadow cut across in front of him. He looked up and saw a high circle of black buzzards, and the slow revolving circle dropped lower and lower.

In the distance, Jody could see the legs moving slowly and convulsively. And in a circle around him stood the buzzards, waiting for the moment of death they know so well.

When he arrived, it was all over. The first buzzards sat on the pony’s head. Jody plunged into the circle like a cat. the black brotherhood arose in a cloud, but the big one on the pony’s head was too late. As it hopped along to take off, Jody caught its wing tip and pulled it down. It was nearly as big as he was. The free wing crashed into his face with the force of a club, but he hung on. The claws fastened on his leg and the wing elbows battered his head on either side. Jody groped blindly with his free hand. His fingers found the neck of the struggling bird. the red eyes looked into his face, clam and fearless and fierce; the naked head turned from side to side. Jody brought up his knee and fell on the great bird. He held the neck to the ground with one hand while his other found a piece of sharp white quartz. The red fearless eyes still looked at him, impersonal and unafraid and detached. He struck again and again, until the buzzard lay dead. he was still beating the dead bird when Bill Buck pulled him off and held him tightly to calm his shaking.  (pp.40-41)

Even though Jody had, like Kino in The Pearl, clawed out some control from unrelenting fate, the repeated failure of Billy is unredeemable. He has failed Jody in his journey into manhood. Billy is the the guide Jody needed. And he failed.

One Response to my thoughts on steinbecks’ the red pony